“Horus the Avenger of White Rabbit Radio sends out his minions to spread “the Mantra,” proclaiming, “Anti-racist is a code word for anti-white” and other derivations of the racist message. While racist rabbits sending minions might sound like some sort of internet hoax, marchers in Springfield’s Jan. 20 Martin Luther King Jr. Day celebration encountered one of the propagators of the Mantra, Jimmy Marr. Marr was standing in front of Springfield High School with a woman holding a sign that read, “Diversity is a code word for anti-white.” Marr was wearing a kilt and playing the bagpipes.”

Minions! LMAO.  We love it.  Of course, they do need to get their facts straight.  BOB WHITAKER did the sending!

“Dana Jo Cook of Springfield says MLK marchers were visibly upset by the sign, and she took a photo and sent it to EW for publication in order to bring “a face to the level of discrimination in our community.”

Cook and others familiar with Marr — who is probably best known in Lane County for giving a pro-National Socialist talk at the Pacific Forum discussion group and leading some members of the audience in a Nazi salute — said they had heard Marr was considering running for mayor. EW asked for confirmation of the rumor in the blog post.

Marr posted in the comments section of the blog that “I had not considered the idea, but I can now see from the comments that I have a moral mandate to exploit every conceivable avenue capable of producing an increase in awareness of White geNOcide.” The spelling of genocide is called for in the “White Rabbit rendition” of the Mantra and the capitalization of white is called for by Bob Whitaker on his racist whitakeronline.org site, where he also tells followers to “use emotional language” and to ask questions like “Why do you hate little White children?””

Yes, Jimmy Marr is a powerhouse of performance…..Kilt or No kilt!  We still don’t know whether the Eugene Weekly is sweet on White Rabbits. Are they going out of their way trying to give us some publicity?   Or maybe they are doing a little publicity seeking of their own?  Jimmy Marr has commented:  “You know times are hard for the anti-White establishment when they are forced to actually print the news. Last week’s White geNOcide thread was the most popular thread in the history of the Eugene Weekly Blog by a factor of at least 100X.”

“According to a Southern Poverty Law Center article on White Rabbit, Horus the Avenger of the radio show is Timothy Gallaher Murdock of Dearborn Heights, Mich., and also uses the name Tom Worth. “He is single and lives in the basement of his parents’ home,” SPLC writes.”

We hate to break the bad news to Ms. Mortensen.  Horus is mostly spoken for these days.  However, we hear Bob Whitaker is currently single and wildly good looking!  Fans will also be upset to find out there are no known White Rabbits living in basements.  Sorry to disappoint all the basement dwelling Nazis.  We do have some good news.  H. Avenger has long been known to broadcast and work from folding tables. They can be moved with lightning speed. 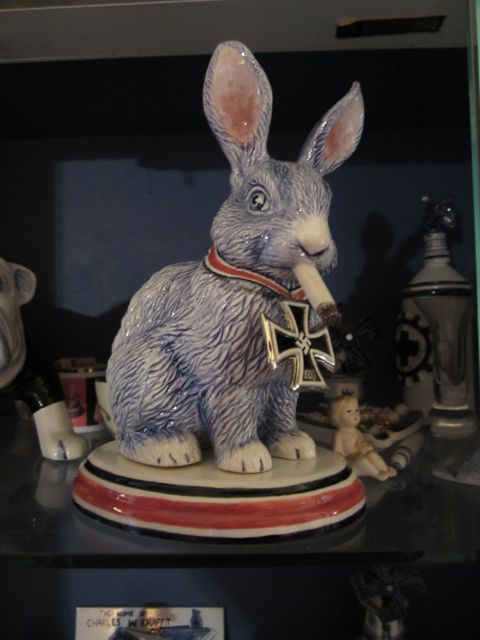 White Rabbit Radio is working to permanently move operations to a basement. The basement will be decorated in full blown Nazi Shabby Chic.  We are currently working to secure the original Klan robe wore by Don Black of Stormfront Fame.  We have already secured the famous “Snuggle Bunny” created by Charles Krafft and banned from France.  You never know.  You might see one of our basement makeovers on HGTV some day.

“The link to the EW blog was then posted on several racist websites, such as whitegenocideproject.com and majorityrights.com. Marr posted it on the racist Stormfront site and on the whitakeronline.org site. This then triggered Whitaker’s “BUGS swarm” which is dedicated to pointing out “the ongoing program of genocide against White people, which is being committed by anti-Whites.”

Essentially, a fairly small number of people begins bombarding a blog, YouTube video or other online comments section with the Mantra. The swarm proclaims itself as “winning” when it overwhelms other posters in sheer numbers. At press time the EW blog had more than 1,050 comments.

Members of the swarm commented from all over the U.S. as well as the U.K., and those who argued against the racist and bigoted posts, such as Cook, were both local and out-of-state. One anti-racist commenter, sociology professor David Brain of Florida, who came into the discussion via Facebook links to the blog, points out that “the internet has enabled these people not only to vent their fear and anger, their sense of powerlessness, but to do so in the company of others like them from all over the world.” Brain and others’ attempts to respond to the swarm’s comments resulted in many repetitions of the Mantra and sometimes name-calling such as “fat white whore.”

Marr is allegedly also linked to the banner that was dropped on the I-5 pedestrian bridge in September 2013 that read “Anti-racist is a code word for anti-white.””

Five years ago we were a fairly small number of activists.  On any given day, our numbers can stagger even our craziest critics.  You need only look at the success of our video channel.  FYI Pink Rabbits, the Current System hell bent on White GeNOcide is in a state of collapse. But we’ll let you continue to drink your Anti-White Koolade a little bit longer.  Maybe Ms Mortensen’s interest is legitimate?  She should come out on March 15th and hold up one of our infamous banners.  Maybe even stand next to Mr Jimmy Marr for a bit.  She could then learn first hand about real activism.  Oh and she’ll also learn a great deal about the Anti-White Media Bias.  On March 15th Camilla will be a community activist concerned about Global Warming, teaching at the local Community College, and living in a hip and cool 1975 Air Stream trailer.  Within 24 hours of participating and showing her concern for White Children she’ll probably lose her job and be known only as an evil NeoNazi full of Hate and Rage…… living in the local trailer park.

“EDITOR’S NOTE: The comment section for the EW blog post that triggered the “swarm” will be shut down (though remain available for reading) after this issue goes to press. The online comments for this story will be limited because even our patience has limits.”

One last LuLz for the White Rabbits.  Anti-Whites just LOVE free speech……as long as they aren’t getting their asses whipped.